By Wildcat Workforce
Posted December 1, 2017
In In the News
Texas Hospitals Magazine: For Texas Hospitals, Investing in Youth is Key for a Strong Future Workforce2017-12-012018-07-17https://wildcatworkforce.com/wp-content/uploads/2018/01/wcw-logo.pngWildcat Workforcehttps://wildcatworkforce.com/wp-content/uploads/2018/07/texas-hospitals.png200px200px

Itati Perez long had an interest in health care, but she wasn’t entirely sure which career route to follow. Today, just a few months after graduating from high school, she’s working as a registered nurse at her local hospital and studying for her bachelor’s degree in nursing. Ultimately, she wants to care for critically ill patients as an intensivist.

“Science was always my favorite subject,” said Perez, 18, a nurse at Doctors Hospital at Renaissance in Edinburg. “And (nursing) is so hands-on — it feels like I’m really giving back to my community.”

In May, Perez graduated from PSJA Memorial Early College High School in the Rio Grande Valley community of Alamo, with both a high school degree and an associate’s degree in nursing. Her education is the result of an innovative partnership among DHR, the Pharr-San-Juan-Alamo Independent School District and South Texas College, which came together about four years ago to develop a dual registration program that graduates high school students ready to join the nursing workforce. Earlier this year, the Nursing Career Pathway Program graduated its first pilot cohort of eight students. In fact, they were the very first students in the nation to graduate high school with a degree in nursing.

R. Armour Forse, MD, PhD, DHR’s chief academic officer, said the hospital’s role in the school program is part of its larger commitment to supporting the community and addressing the area’s nursing shortage. According to 2016 survey results from the Texas Center for Nursing Workforce Studies, the Rio Grande Valley is home to some of the state’s highest vacancy rates for nurses — more than 32 percent for nurse practitioners, for example, and more than 11 percent for registered nurses.

“For us, it’s a natural fit,” said Carlos J. Cardenas, MD, chairman of the board at DHR and current president of the Texas Medical Association. “We’re a community-focused and community-driven organization. It makes sense to want to recruit our young folks to come forward and work and grow in their community. We’re invested in growing our own.”

Cardenas also noted that many young people in the Rio Grande Valley experience significant hurdles in accessing higher education. A 2016 report from RGV FOCUS, an effort to improve college readiness and access in the region, found that more than three-quarters of students living in the Valley are considered economically disadvantaged, and only 22 percent of adults ages 25 or older have an associate’s degree or some college education. However, the report also found bright spots, particularly among young people ages 18 to 24, among whom 42 percent had an associate’s degree or some college education. Cardenas hopes DHR can raise that percentage even higher by helping to reduce the cost and debt of pursuing higher education.

“Education is key to bridging the disparity in income that exists in many families,” he said. “The more young people going into the health professions, the more of an example they can provide for those coming up behind them that this is achievable.”

Of course, widening the professional pipeline certainly isn’t a new endeavor for hospitals. But in Texas, that pipeline is increasingly crucial to the state’s future ability to care for a growing and aging population. According to the Texas Medical Association, the Lone Star State ranks 45th nationwide in the number of physicians per population, and federal data published in September finds Texas is home to more than 400 designated health professional shortages areas.

Fortunately, a number of Texas hospitals are taking the health worker problem into their own hands, offering young people in their communities a unique opportunity to get a head start in health care. 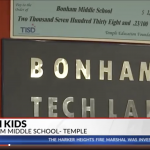 KWTX: Temple: High school students get a lesson in bankingIn the News