Goat born at school a surprise

“When I came here (the school barn) there was a little goat in my pin,” she said. “It was very surprising!”

Steele bought the goat when she was just a freshman and raised the doe, which is now 4 years old, at the school’s barn as a part of her veterinary studies for Career and Technical Education.

“One year I really thought she was pregnant because she was so fat,” she said. “But she wasn’t and it was really kind of sad.”

Steele said for three years they were hoping Boot Strap would get pregnant, but they were unsuccessful. Boot Strap has been considered obese for the majority of her life, Steele said. She believes there is an underlining health issue that has resulted in the goat’s weight gain making it difficult for the goat to get pregnant.

Steele said it was her sophomore year when she thought Boot Strap would be expecting a baby goat. So she prepared for a new addition.

“I decked out her pin with all kinds of things to make the baby more comfortable,” Steele said. “But I never got a baby. So I thought, OK maybe next year. But then the next year she didn’t have one again.”

Steele said it was sad and frustrating. The last time a goat was born at the barn was four years ago.

“This year I thought there was no chance she was pregnant,” she said. “And now she has one! It is amazing.”

Jaycee Thompson, Steele’s agriculture science teacher, said when she got to class on Thursday morning there was a lot of confusion and excitement coming from the barn.

Thompson said the actual term for a “baby goat” is a kid.

“Once I put that together I rearranged my lesson for the day and we went out to the barn,” she said.

Thompson said they checked on the new addition, whose name is Roper, and made sure Boot Strap was checked out by a veterinarian after learning she was limping after giving birth.

“We were assuming she couldn’t get pregnant because she was too obese,” Thompson said. “But I am glad the students got to see it. A lot of the kids who were in class that day have never seen a baby goat before.”

Over the years, Steele said she has developed a close bond with her four-legged buddy.

“She is very pleasant to have, I just love her. She follows me around and she seems to only like me,” she said.

In the fall, Steele said she will be attending Tarleton State University in Stephenville to become an animal behaviorist, a profession that interests her because of the unusual behavior and aggressiveness Boot Strap has demonstrated towards other people.

“She is odd. She is not normal,” Steele said. “So it’s a good experience to try to figure out why she acts that way because I haven’t yet.”

Steele will show the mother goat at the upcoming Bell County Youth Fair and Stock Show on Feb. 7. She said Boot Strap will more than likely be well-received for having a kid with her.

“It hopefully means she will get the cuteness factor,” she said. “It probably won’t affect her placing other than the judge will know that she can produce a successful birth.”

“The baby goat will give her more of an advantage in the show ring, especially since Boot Strap is a breeder goat,” Thompson said. “It always looks good when they have a baby next to them if they are being shown as a breeder.”

Steele said she when she graduates from Temple High, Boot Strap and Roper will be relocated from the high school to a farm and will wait for her to finish college.

Steele hopes to have her own land by then so she can continue to care for Boot Strap and Roper. 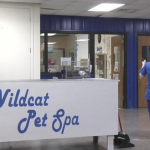 Horsing around at school: Temple High students get hands-on equestrian experienceIn the News